The initiatives took place on Friday 30th September and included a departmental bake off, name the bear competition and a staff raffle with prizes kindly donated by suppliers. The Bank invited its employees’ friends and family, suppliers and customers to join in on the day. Unity’s neighbours, Free Radio, were also on hand and DJ, Dan Kelly, helped to select the lucky winners of the fantastic raffle prizes, which ranged from grocery vouchers and champagne, to iPod minis and a HP laptop.

Unity’s employees contributed by bringing their baking skills to the Macmillan decorated table, with a representative from each department being entered into the big ‘Bake Off’ style competition. Three of Unity’s executive committee eagerly volunteered to judge the entries, with the winner awarded £100 to donate to a charity of their choice.

Julia Tarpey, Director of HR at Unity, said ‘Each year over 330,000 people are diagnosed with cancer in the UK. Our event was a huge success and the incredible support of our employees matched with the generous donations of raffle prizes from our suppliers meant we were able to raise £1000 for Macmillan. The bank matched what was raised by our employees to make a grand total of £2000 which is fantastic.  I am delighted that the money raised is going towards such a great cause’

Margaret Willis, CEO of the Bank, added, ‘Cancer touches us all at some point in our lives and we are all proud to support charities like MacMillan that share our philosophy of serving the common good.’ 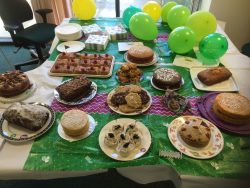